Last weekend I went on the Why Not? Japan ski trip. We all met at Kyocera Dome in Osaka and took off towards Gifu at 11pm. It was a long ride full of fitful sleep. I was sleeping against the window, which was freezing, but the other half of my body was sweating because the heat was cranked up so high. So my body was confused and I woke up every hour or so with one armpit frozen and the other armpit sweaty. Charming.

When we finally got to Gifu I shared a room with Misty, Cherrelle, Natalie, and Leah. We were fortunate enough to have an attached bathroom, as everyone else had to share the bathroom down the hall. Score! Cherrelle and I chose to situate our futons closest to the heater. It was quite comfy!

We started skiing right away. I learned my lesson from my Fukui ski trip, where I didn't have proper snow pants. I decided to wear my panda suit instead of a real snow suit. The reason for this was threefold:
1) It was warm.
2) I didn't want to spend a buttload on warm ski pants.
3) Everyone loves a panda.

Sure enough, I stayed plenty warm! I also posed for plenty of picture for strangers and got many a "Panda-san! Konnichiwa!" catcall from the ski lifts. Once or twice I almost crashed hearing someone shout "Panda!" With me craning my neck and my lack of peripheral vision, you can imagine the potential disaster that was!

While I had a ton of fun, there are a few things I could complain (slightly) about. The first was that my skis were ridiculously short. They said 150cm (I usually ski on 156), but they felt and looked more like 140cm.

Second, they weren't exactly tuned. Someone had waxed the bejeezus out of them, so they were slick as all get out, but I couldn't get an edge no matter how hard I Ieaned, and the slippery little planks just flailied about beneath me. Needless to say, I did not ski my best all weekend. Also, the boots SUCKED. I have never seen adult-sized boots that only have ONE strap on them. And, the strap was up at the top of the boot near the calf. I am not what you called a small-boned lady. Only being able to strap around my fat calf meant that the rest of the boot was too huge and my feet were swimming in them. So, I had to exchange my boot sizes for a whole size smaller. It was a little too small, but at least I didn't feel like I was about to twist my ankle! I think they gave me a kids size because I had a white boot with pink and purple accents, much like my very first pair of boots I got when I was 11.

So enough about the disappointing equipment. The mountain was much smaller than Skijam, so I went through everything within an hour and was chotto bored near the end of the day. If the snow was fresh powder, it would have been way awesomer, but it had started to get really slick and nasty by the end.

Also, another bit of unfortunate stuff happened. I was skiing with Fergus, who ran into his friend Jason. Jason was with his friends Joanne and Alistair. We had barely said hello to Alistair when we all went down the run, and Alistair had a terrible fall. Turns out he had some internal bleeding, and we had to get ski patrol for him. Fergus was gentleman enough to ride with Alistair, whom he didn't even really know, and act as translator as the ambulance rushed him to the nearest hospital an hour away. Alistair had to get some surgery to stop the bleeding, and I think now he is daijobou. But what a way to spend your first visit to Japan!

Anyway, by the end of day one I was tired but still smiling, and luckily not a bit sore. We all had a big yummy dinner in the dining hall, and they even put a fireworks show on for us.

After that we had an all you can drink party full of beer and chu hi. We drank ourselves silly, and Bridget and I even climbed into a cupboard and drank some more.

The next day it was quite the challenge to drag ourselves out of futon to catch breakfast. After breakfast we all napped for a little while longer, and then Panda and I ventured out alone for a couple hours. The snow had gotten icier since the night before, and my skis certainly didn't improve themselves, so I was only able to muster another couple hours of skiing before I called it a day and went in to pack.

Everyone was to be packed and ready to leave by 2pm, and in pure Japanese fashion, we were all on time and promptly loaded onto the bus. The rest of the ride back was tiring because most people were exhausted and sore, and this time we didn't have the luxury of darkness outside to help us sleep. I pulled my beanie over my face and tried to catch a couple hours before we got back to Osaka.

Luckily the ride back wasn't too torturous, but we were all so tired and still had about an hour more to travel back to Gak. By the time we dragged our sorry bodies into our apaatos, it was 11pm, and I was more than ready for a hot shower and a deep night's sleep. 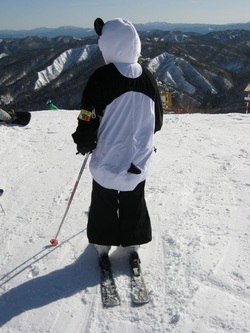