What in the Heidi Klum in lederhosen hell did I just eat?


So I woke up this morning a bit woozy from last night's enkai and nijikai celebrating Culture Fest. The Giants are playing game 6 at Philly, so I wanted to be sure I can watch that, so my plans for the day included not moving from my mattress and laying with my laptop rooting for the boys in orange in black. But I was STARVING. I had drunkenly eaten all my potstickers last night while Skyping after catching the last train home. All I had were ingredients to cook something really yummy, but in my impatience I didn't want to have to wait that long. So at the bottom of the 6th I jogged down the McDonalds down the street in hopes of picking up a McGriddle, which I used to think was gross but suddenly had an intense craving for.


I got there at 11:10, and they'd already switched to the lunch menu. Blech. The rest of the McDonalds menu aside from a McGriddle sounded so gross to me. But then I saw that this month they are offering a special sandwich, called the "German sausage." Interest piqued, I bought a seto and made my way back to the apartment (missing Uribe scoring at the top of the 8th, dang it!).


Immediately upon looking at the box, I regretted my decision. Ew. Sausage in a sandwich? I opened it up to find a Japanese-size sandwich that appeared to have a breaded/fried chicken patty, a slice of round sausage that covered the bottom bun, some cheese, fancy German mustard, and saurkraut. Mein Leben ist beschissen.


This salty, krauty, fried mess is exactly as it sounds... a salty, krauty, fried mess. The saurkraut  wasn't even tangy, just cabbagey. And the chicken patty wasn't delightful breast meat, it was clearly a mish mash of thigh parts tossed in a ton of salt and then held together by a breaded monster. But I paid for it, and my stomach was angry, and my laziness superseded any pride or dignity I had in me so early in the day, so I ate the thing. Boo.


I expect a comment on my health and dietary decisions from my mom coming in approximately 3 minutes. 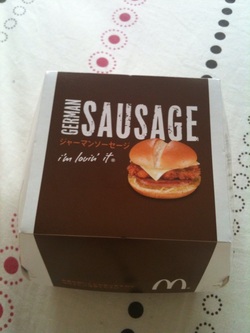 Yes, I am eating on my bed. 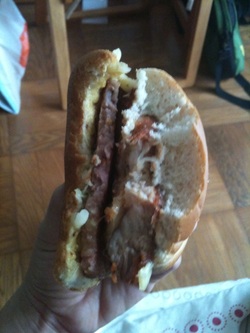 Thanks for the warning...when I visit you I'll stay away from that stuff.
With your vivid description, it is definitely a turn-off!!!