This weekend was spent on the Yoshino river having a happy time at Happy Raft!

We left Friday night in rented minivans from Sogoundokoen station. The only person I vaguely knew was Kyle, a fellow Kobe JET. The other JETS were from Hyogo and beyond. Since we were leaving at around midnight, it meant that it was sleepy time in the cars until we got there. Shikoku is an island about 4 hours south of  Kobe, so the plan was to get there and keep sleeping until around 8. It would not only save us a stay in an expensive lodge, but it would also save toll to travel in the middle of the night.


I slept pretty soundly until the sun came up, then I tossed and turned in my minivan seat until everyone else woke up. The first day was a full day of rafting. I was in a raft with 5 others: Kyle, Takeshi, Erica (too!), Emily, and Adina. Aside from being very beautiful and picturesque, the river is cold! No surprise here, but it was just colder than I had expected it to be, considering it is somewhat shallow this time of year and we just got through what was said to have been one of the hottest summers in recent history.


The raft was guided by Adam, whose nickname at Happy Raft is Smeagol. Was it cuz he wasn't very tall, or because he was from New Zealand, or because he was mostly naked except for a loincloth? (I made that last part up.) We went down several different rapids and even got to "surf" the rapids, where Adam intentionally guided us into the falls and we got dumped on repeatedly and I got both ears full of water. There were all sorts of other antics going on too, including pulling each other out of passing boats, intentionally flipping is off the sides, jumping off rocks, and "riding the bull." The lunch included one of the best tuna sandwiches I've ever had, served on a bagel none like I've had anywhere else. I've tried to find bagels in Japan since then, and had no luck.  So the first day was exhausting but really fun, and I ended it feeling extra happy.


That evening, everyone else went to stay at a lodge 40 minutes away. I had decided to camp, not only to save money, but because I love camping and was told it would be on a nice cushiony field. Nope, it was just a gravel parking lot! I was also under the impression that other people would be camping too, but when I woke up from my post-rafting nap, I discovered that I was the only one in the gravel lot. Alone. By a river. At night. Deliverance, anyone? Thankfully Japan is a really safe place, and if I had to, I could scream for the people at the rafting place, or use my pretend kung-fu skills. Just in case, I had my iPhone programmed with 1-1-9, the emergency number in Japan. Oh, did I mention that I forgot my sleep sack in Kobe, so I was essentially sleeping inside a bare tent with just a pillow and track pants and a sweatshirt to keep me warm? Luckily I can basically sleep anywhere, and I was glad to be at Happy Raft in the morning because I got first dibs on the fresh hot green tea. Plus, I woke up to the beautiful view of the river below me!


Day two was our canyoning day. The same people from my raft did canyoning in the morning. It was a series of sliding down waterfalls, ziplining, swimming, cannonballing, jumping, and general awesomeness. I wish it could have lasted all day! We had to double up our wetsuits because the water up high was even colder than the river. In all honesty, the half day of canyoning was more fun than the full day of rafting! It was also very cool to be in a forest and really feel like we were on some kind of ninja safari (cuz we looked like ninjas in our little outfits!)


After canyoning, we changed into to dry clothes, took down my tent, and then headed home!
On our way we had to stop to get some of Shikoku's famed udon. It was yummy, not surprisingly! Then it was time for more naps, and we were on our way.


If anyone wants to go canyoning when next season opens in July, let me know! 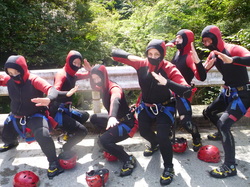