Rafute: Making other types of pork feel bad about themselves

When Dan and I got to Okinawa, it was probably about 5:00. It wasn't quite dinnertime, but it had been a while since we had eaten, and, just like a small child or a Mogwai, if I don't adhere to a regular feeding schedule, I get quite grumpy. We were taking the 120 bus (which, unfortunately, became our only mode of transport for much of our stay in Okinawa) up to Chatan from Naha, about an hour on the 58 "freeway" (more like a 2-lane road packed with people driving at freeway speeds). We passed through a busy area of Naha, illuminated with the tacky glow of flashing neon and running marquee lights. It was definitely the tourist shopping section, where you can pick up a cheap souviner or cheesey T-shirt to remind you of your time in this fabulous place. We weren't entirely confident in where we were going, and I was starting to get really grouchy (Dan just getting over his own grouchiness after being told to shut his Kindle off on the plane). We found a Korean BBQ place and, despite the pricetag, agreed to eat there. It was pretty yummy, but the highlight of the meal wasn't what we paid for; it was the succulent amuse bouche that they offered us while we waited.

Placed in a tiny dish that could easily fit in a child's palm, two tiny slices of pork sat in some broth. Hungry and not caring if it tasted like wet toilet paper, I plunged my chopsticks in for a bite.

The best way to describe the texture of the meat is this: pillowy. Yes, this meat was pillowy, as well as moist, and extremely fatty. But, as I've stated in previous blog posts, I am not opposed to a little fatty porky goodness! This was my first taste of Okinawan Rafute, and it certainly would not be the last.

The following days, we had some rafute on a couple occasions. It was always soft and fatty and delicious, and always swimming in a bit of tangy-sweet-tamarind-y sauce, and always regretfully too small a portion. Probably my favorite taste of rafute was at a small restaurant by our hotel called Celluloid, a place whose decore I obsessed over and somewhat envied, from the velvet covered menues to the amber colored illumnated orbs on the wall. But the rafute was even better than all the restaurant's design elements combined! Dan and I literally made accidental "omnomnom" noises as we ate up every last fatty morsel of rafute presented to us.

It should be noted that Okinawan food is much different than other Japanese food. It is usually spicier or more full of flavor, with a heavier emphasis on fatty meats. Much like a certain other island communities I know (looking at you, fat-loving Philippines!).

I vowed that when I get back to the States, I will check out the butcher on College Ave. by our place, buy a pound of pork belly, and attempt to make some rafute.

But until that day comes, I invite you to follow this recipe I found, make some yourself, and report back to me!

Next up: Kobe beef! 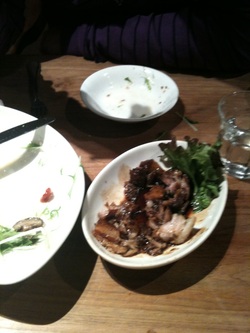 Maybe not the best picture... but soooo delicious!
0 Comments